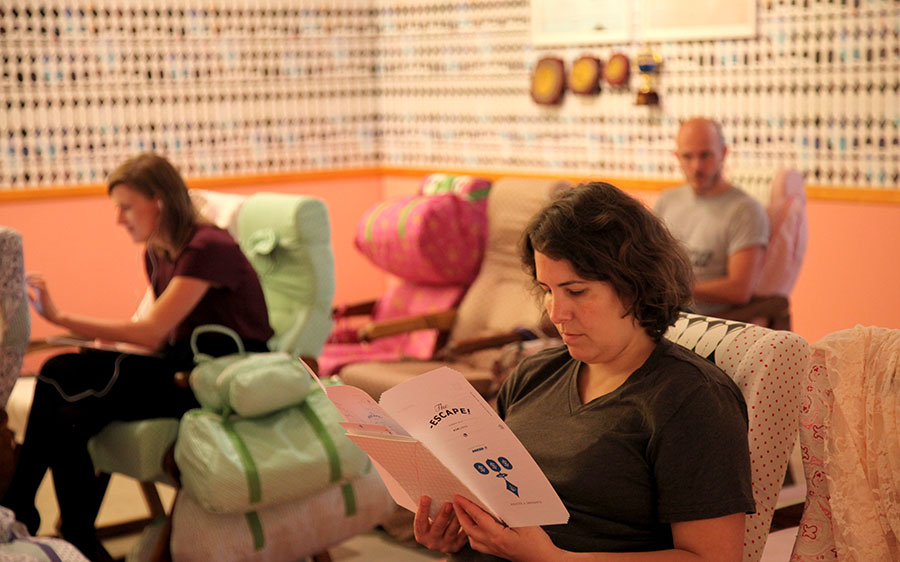 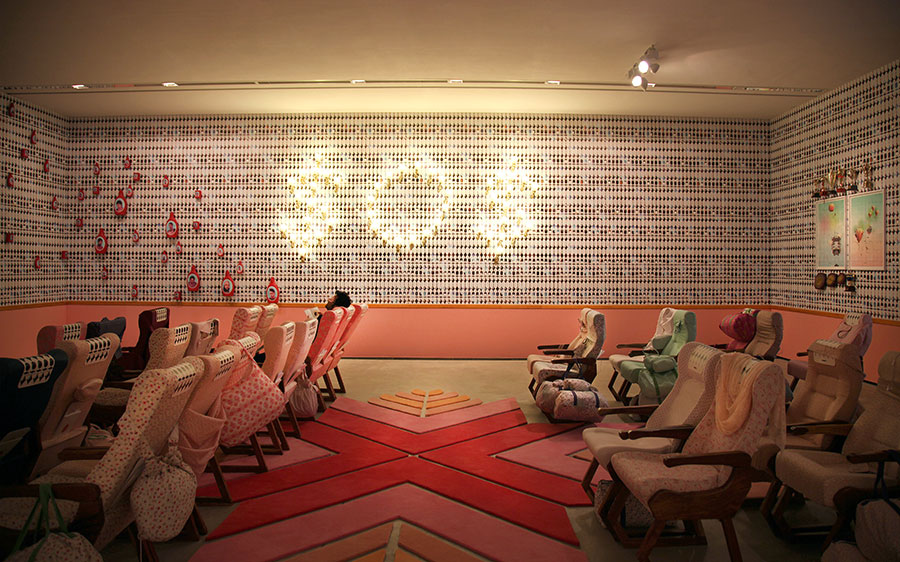 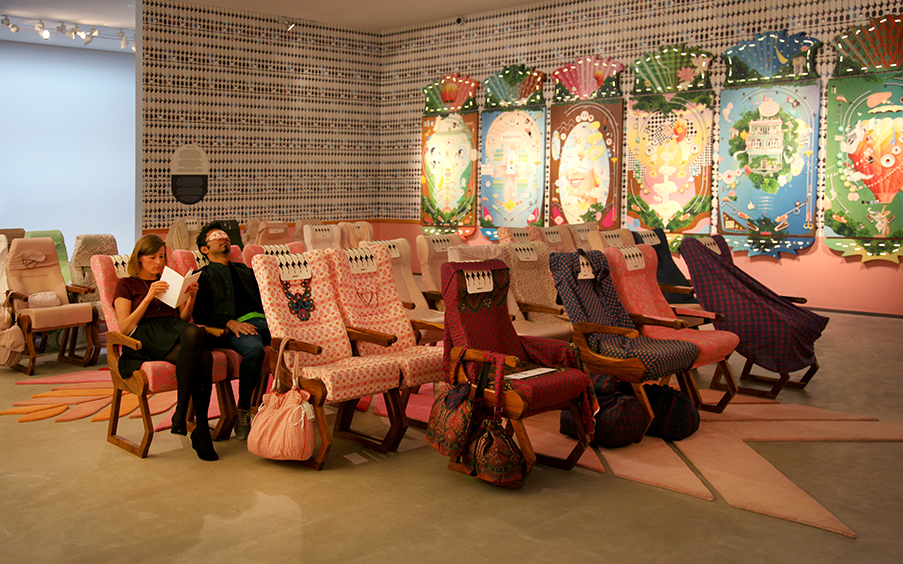 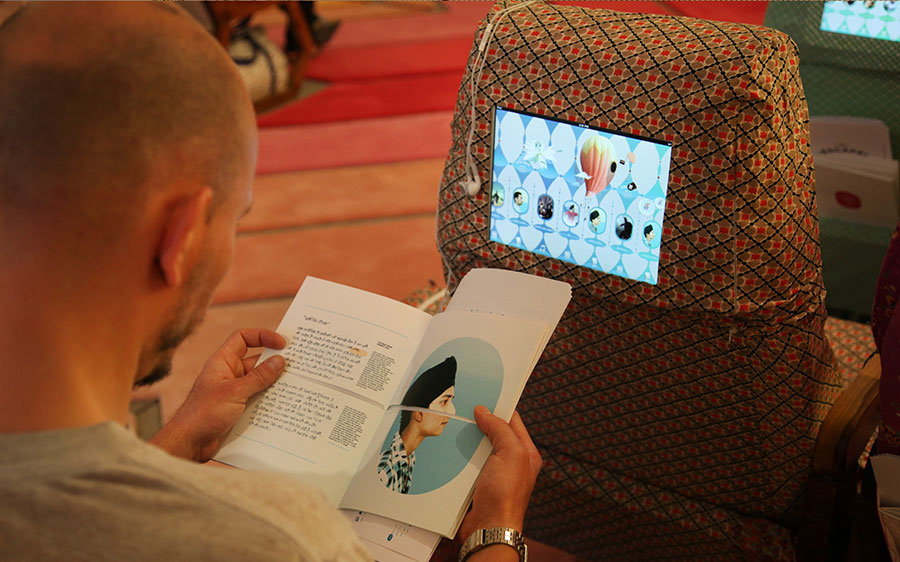 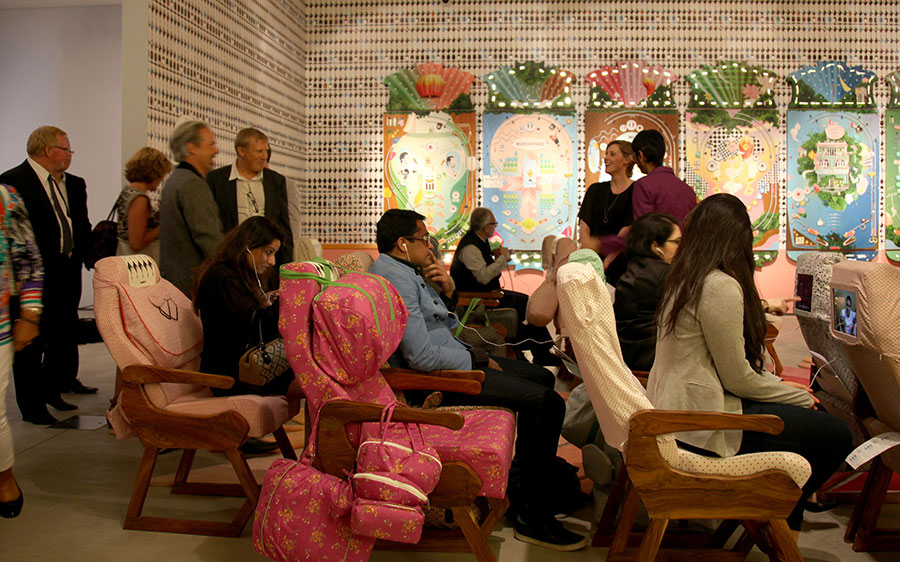 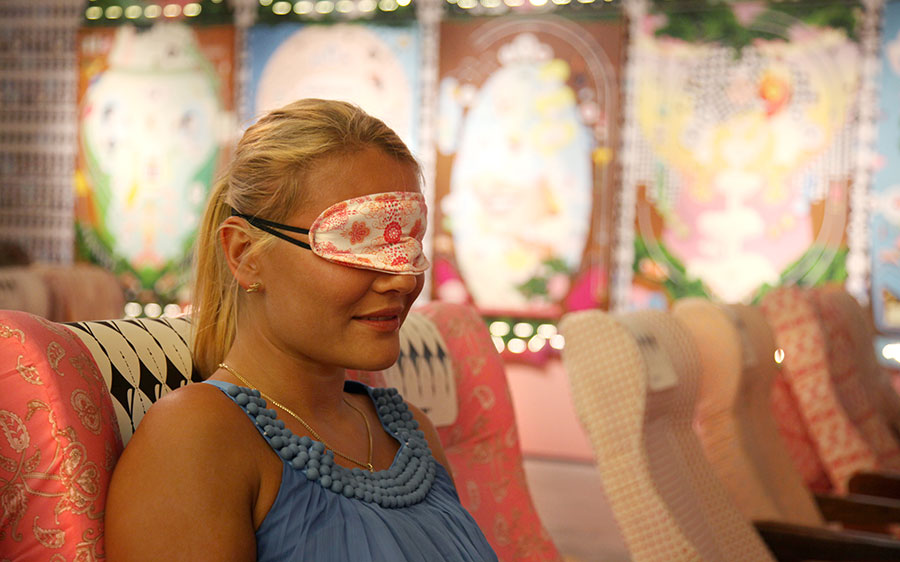 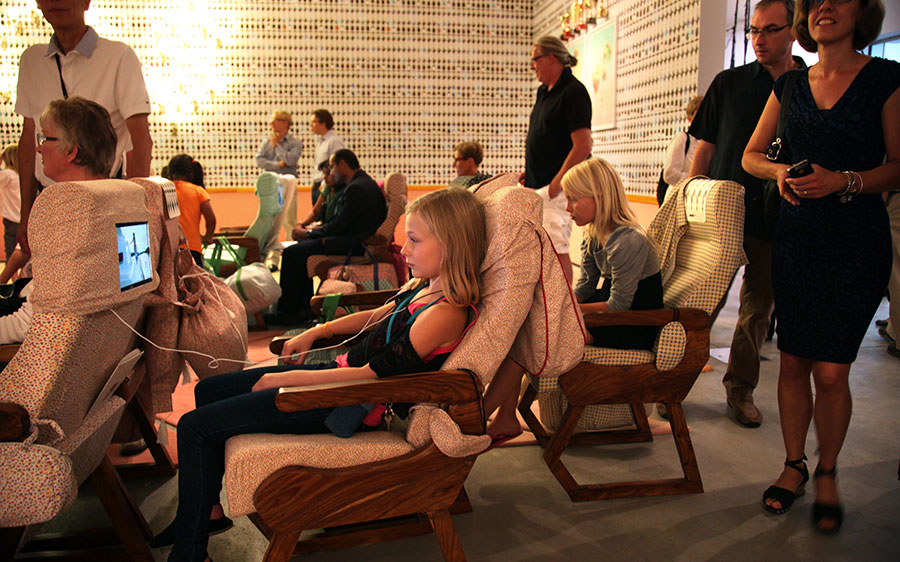 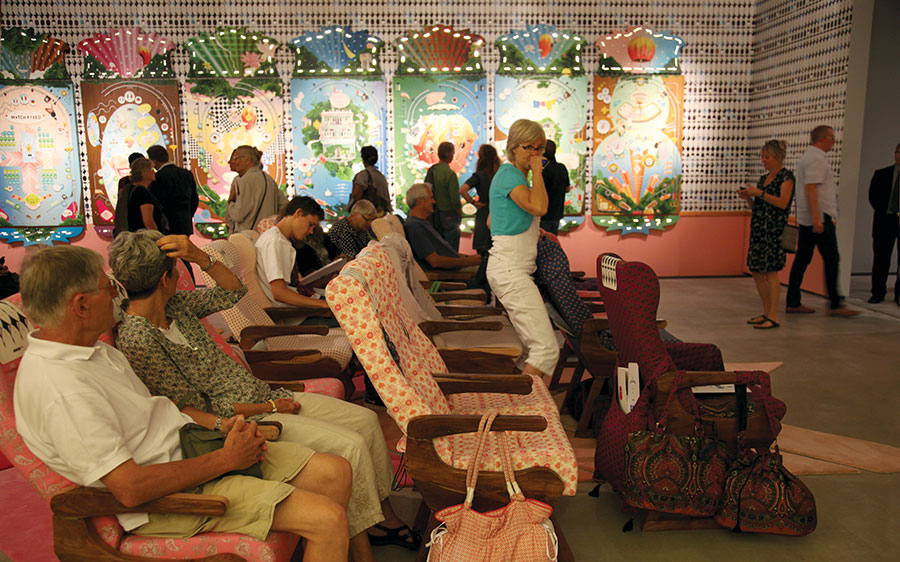 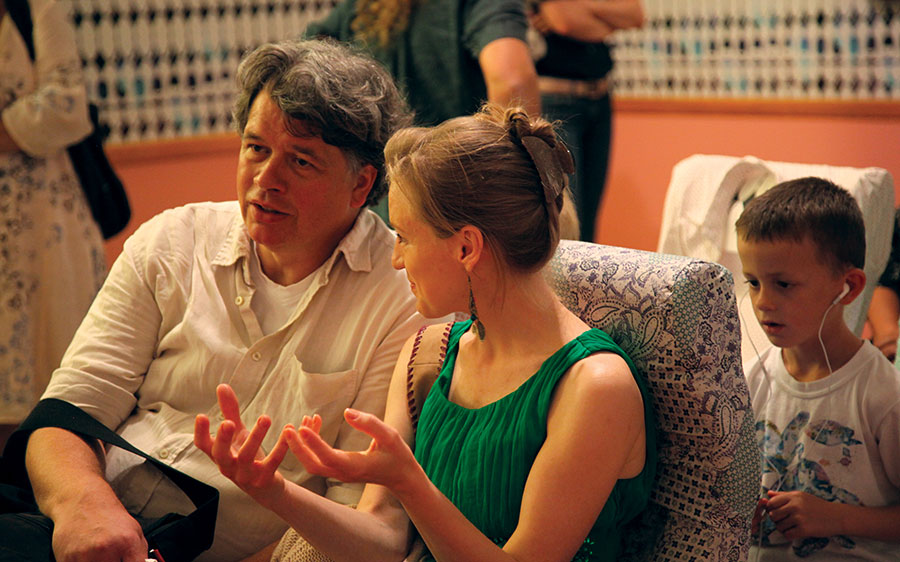 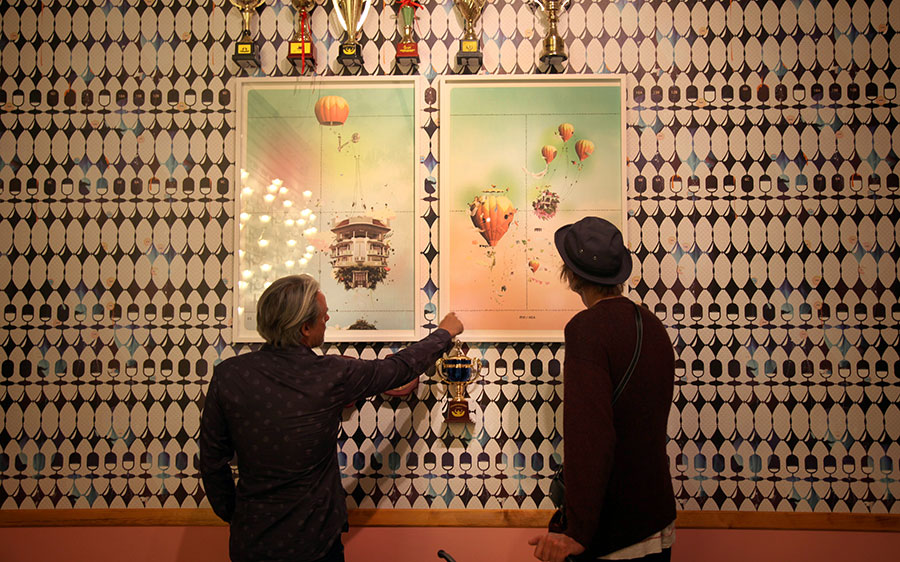 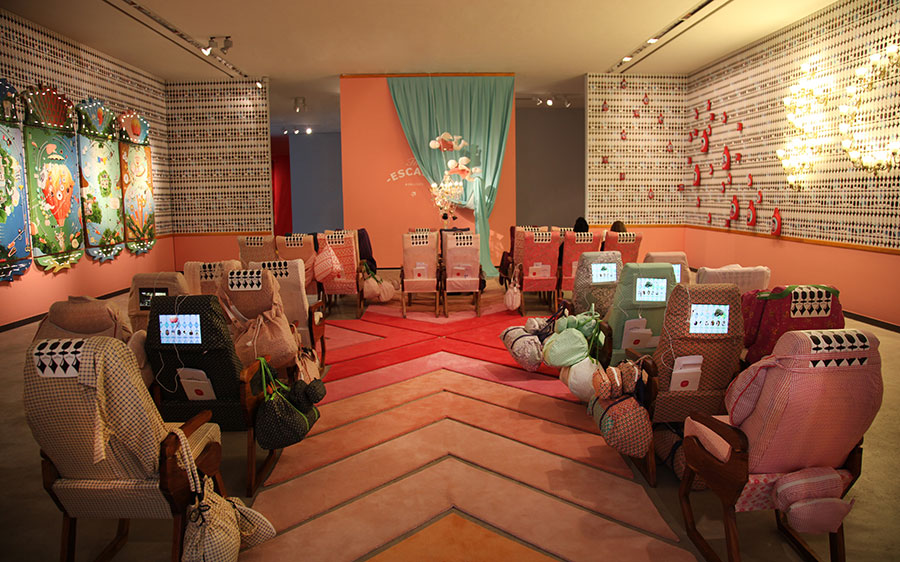 Over the past decade India has made its mark as one of the most vital and innovative centres of contemporary art. With great creativity and intellectual depth a new generation of artists is reacting to the rapid changes typifying the globalized cities of the world’s largest democracy.

In the autumn of 2012 ARKEN is devoting its whole exhibition area to a comprehensive presentation of Indian contemporary art.

The artists in the exhibition lose themselves in the chaos of urban life or seek out a quieter, inner life. They describe the dreams of a new generation and expose social conflicts. With paintings, sculptures, photography, installations and interactive art the exhibition offers unique insight into the aesthetic spectrum within which artists today are interpreting our existence on the borderline between the local and the global.

INDIAN CONTEMPORARY ART is a wide-ranging presentation of the new art of India with a whole array of related activities such as lecture evenings, educational processes for children and the young, and a festival programme of Indian films at the Copenhagen Film Festival.

The project is associated with a research programme at ARKEN on contemporary art and migration, which will result in a conference and a book.

Title: The ESCAPE! Reset/Resume 2012The immersive installations of Thukral & Tagra (T&T) combine a wide variety of media and stimuli to address multiple issues simultaneously. In the past few years, T&T have explored in their works the continuing desire for Indians to leave India, the rise of the Indian middle class and its consumer society, the increased awareness of sexuality among India’s youth and the need for safe sex education, and the increasingly urbanized yet unregulated India epitomized by the New Delhi suburb of Gurgaon, where the artists live and work. All of these issues revolve around Indian identity: how Indians themselves perceive their nation, how they interact within a global context in which they are gaining increased relevancy, how they change and adapt.

For the exhibition “India: Art Now” at the Arken Museum of Modern Art, Thukral & Tagra (T&T) have taken inspiration from a number of sources. The visitor to their installation will find themselves inside of a stylized pinball machine, albeit one also resembling the inside of an airplane cabin with rows of seats. These seats are upholstered in tacky, mis-matched fabrics, typical of north Indian middle-class homes. On the backs of some seats are tablet screens providing the “in-flight entertainment”: a selected guide through the more outré examples of Punjabi pop and rap music hitting the airwaves in India today (most of which regurgitate American gangsta-rap models while reflecting both the desire to leave India and the nostalgia for home experienced once outside). The airplane seats also recall the lucrative market in fake visas and human smuggling so prevalent in the Punjab today. Yet, Thukral & Tagra have also domesticized the airplane cabin, referring to the schizophrenic lifestyle of increased international travel experienced by more and more Indians.

A suite of paintings based on the graphics of pinball machines line one wall, complete with flashing lights. Pinball is an antiquated entertainment, now replaced by video games and interactive computers, harking back to the days of a simpler, more naïve India. The graphics seem almost quaint, as if from a 19th Century carnival, when compared with the more garish and violent imagery of contemporary video games. As in other works (namely the series “Sominium Genero” which turned retro radio and television cabinets into satellites and space ships or the series “Dominus Aeris” which envisioned suburban homes as kitsch trophies), T&T tap into an appetite for both sentimentality and nostalgia so prevalent today within middle-class India. Carpeting on the floor in a large graphic sourced from Punjabi Phulkari embroideries further emphasizes this casino atmosphere.

Thukral and Tagra use pinball as a metaphor for the young, cosmopolitan Indians of today (like themselves): bounced around by the forces of globalization, moving between the traditions of family and religion and international influences. Flashing lights and a synthetic soundtrack heighten a feeling of anxiety, akin to the cliché “chaos” of the Indian street, while the installation also replicates the feeling of the five-star hotel, that traditional retreat from the “real India” into an international, ersatz space of cool, antiseptic cleanliness. Like the India of today, the installation taken as whole tries to be too many things all at once, over-loaded with information and basking in contradictions.