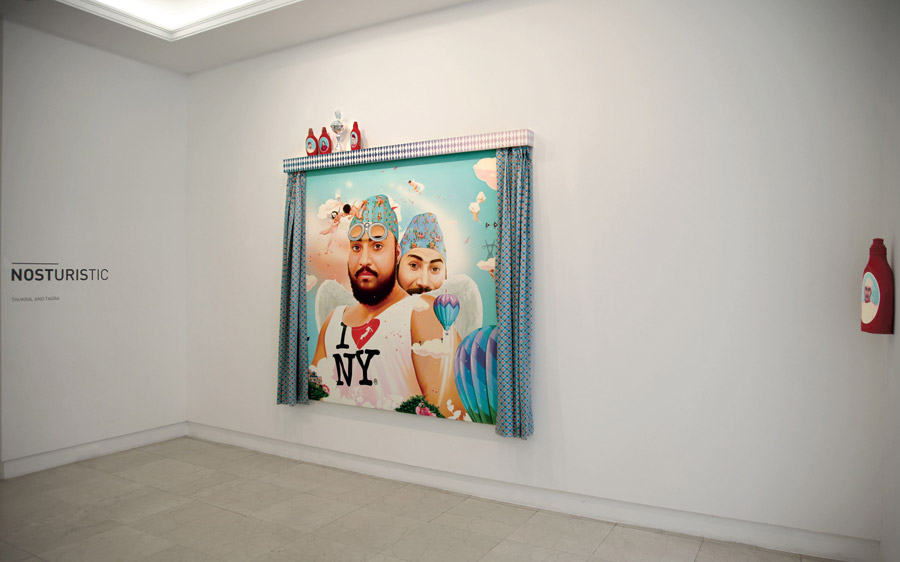 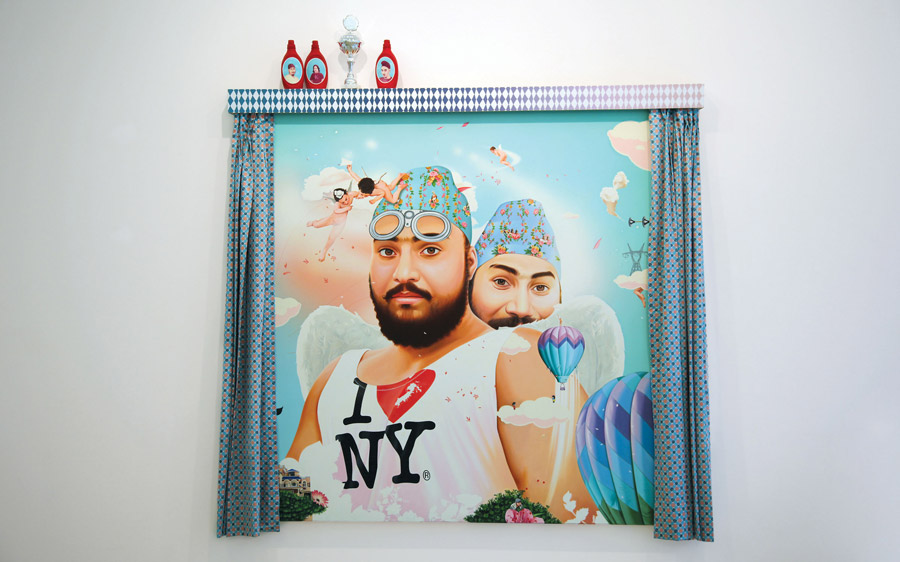 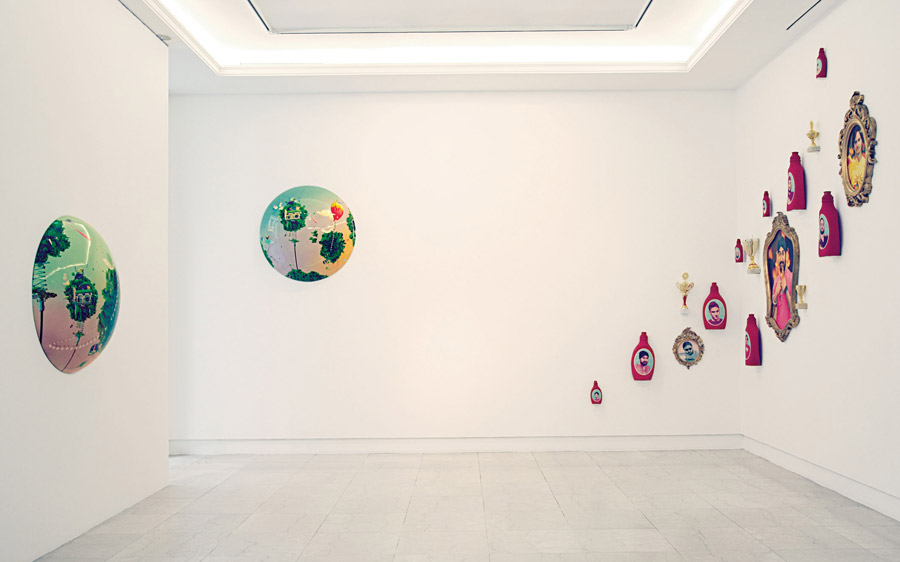 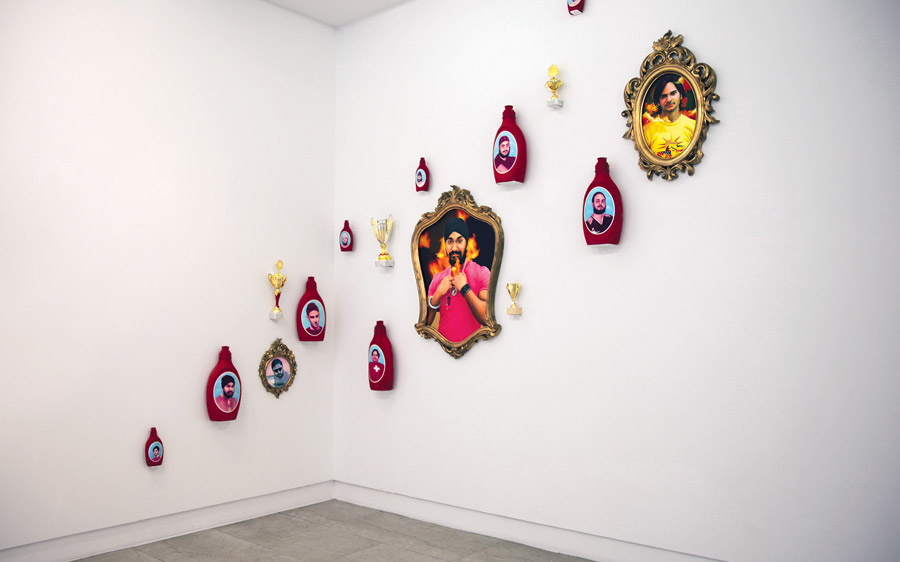 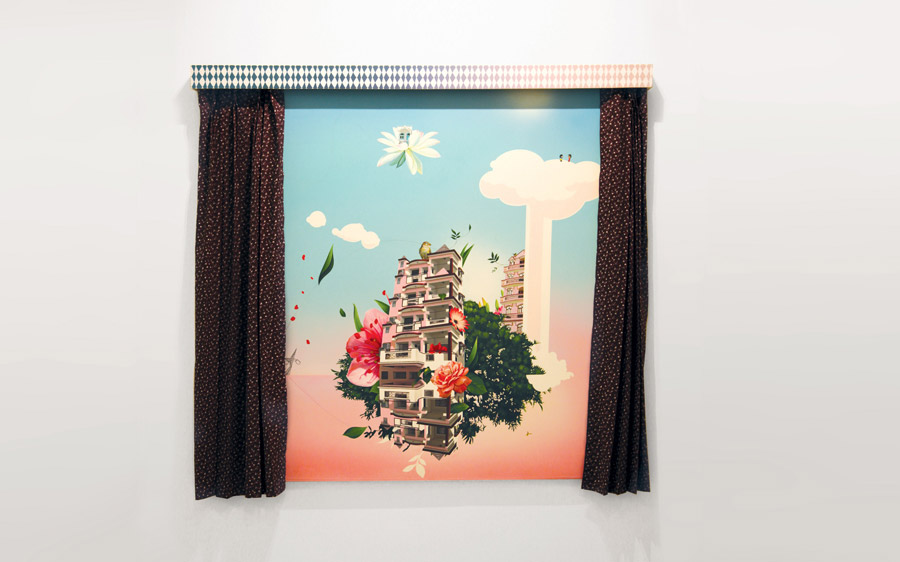 Thukral & Tagra – NOSTURISTIC
Opening: Thursday, June 21, 2012 – 7.30 pm
Location: Hilger contemporary
Dorotheergasse 5, 1010 Vienna
The show is ongoing until July 28, 2012.
“Punjabi Baroque” is a term coined to describe the postmodern architectural style of India’s new middle class. It is one marked by exaggeration and grandiloquence, with the buildings often combining elements of bygone architectural eras and flamboyant colors. The builders themselves – without the assistance of architects – insist on implementing this style, a fact that reflects their dream of creating their own home. As a result, a wild conglomeration of different buildings now dots the Indian landscape. Jiten Thukral and Sumir Tagra, a collective of two artists, explored this idea of the new dream home in a series of works entitled Dominus Aeris (paintings of flying houses). Also known as T&T, the duo has inflated these “bloopers of architectural style” even further, transforming the new suburban homes into surrealistic flying castles. Smooth and sugar coated at once, T&T’s buildings float on clouds of flowers, surrounded by light chains and other abstruse details in the otherwise empty airspace. Undoubtedly, the doors to the pompously decorated living rooms of India’s nouveau riche have thus been opened!

The two artists live in New Delhi, from where they collaborate on their multi-disciplinary projects – everything from paintings, sculptures and installations to video art, product and web designs, music and fashion. Their work also takes them to Gurgaon, a satellite city located 30km southwest of the capital, and an emerging hub for the manufacturing and technology industries, as well as an important home for India’s growing middle class. The local boom in Punjabi Baroque apartment buildings, high-rises, colonial bungalows, mega shopping centers and supermarkets makes Gurgaon the ideal “research location” for the duo’s artistic endeavors. However, alongside the city’s new steel and glass cathedrals, money and Bollywood feeling, there remains a good deal of dirt in the streets.

T&T’s precision-painted, large-format works are complemented by a series of smaller portraits of young Indian men, which are presented either in baroque oval frames or applied to disposable bottles. Most likely, one should imagine the depicted characters to be the inhabitants of the flowery mansions soaring through the skies and meandering clouds. The men typically display buff upper bodies, well groomed facial hair, tribal tattoos, turbans, T- shirts and Playboy neck chains.

Another part of the exhibition is dedicated to new T&T ceramic works that were produced in the Meissen porcelain factory, in Dresden. Starting with classical vases from the Meissen archives, the duo created their own versions featuring their comic style and trademark imagery, as well as candy colors. The transformations and re-interpretations resemble other- worldly constructions. Not only do they bring late 19th century design into the 21st century, but they also prove that artistic ideas from the East and West can be skillfully united.

Thukral & Tagra blur the lines between fine art and popular culture, product placement and exhibition design, and artistic inspiration and media hype. Their works comment on the globalization of consumer culture and the repercussions of this development as it is being experienced in India today, but always with a dose of pop sensibility. While playful and humorous, their art expresses thoughtful questions about the nature of Indian identity – and T&T’s combination of kitsch, trash, irony and surrealism is undoubtedly unlocking paths to discovering contemporary Indian identity.